Normally, I only share my book reviews on my publishing blog. I'm making an exception in this case, though, because I wanted to let you know about this special book. In the interest of full disclosure, the author is an online friend. I like to think that doesn't paint my opinion of her writing, but I'll leave that up to you to decide. 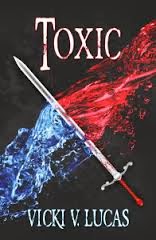 I was given an ebook copy of Toxic for this review. As I neared the end, I asked the author if I could buy signed copies of both this book and its sequel. I have a small collection of signed books and knew this was a set I wanted to add to it.

One of the main things that drew me into the story was the way Lucas introduces the characters. Foehn is a special favorite of mine - I love how the author gave a personality to something normally not seen as sentient.

The main characters are both flawed and virtuous, brave and deceptive, naïve and wise. There is the perfect balance of "good" and "bad" traits, which makes the characters easy to relate to and realistic. (Realistic is my goal as a writer, so that's the highest compliment I know how to give.)

There is less of a balance when it comes to the evil characters - I can't think of many redeeming qualities in them. This works well within the story, though. There is a firm distinction between good and evil; no gray areas. I appreciated this aspect.

That isn't to say that it's always clear who the evil characters are. In some cases, things are revealed to the reader around the same time they're revealed to the characters. More than once I found myself questioning the true motives behind the character's actions and wondering if my first assumptions were incorrect. This was brilliantly done.

The good vs. evil also comes through in the author's use of magic within the story. I'm one of those readers who sometimes objects to magic in a story, but Lucas portrayed it well and made it very clear who the magic was coming from.

The narrative jumps in and out of several different characters' perspectives, which could be confusing if it wasn't handled as well as it is. Between the picture before each switch in narrator (a different picture for each character) and the unique "voice" of each character, it was always clear whose perspective was being shown. Seeing the situations through different eyes added a deeper understanding to the story.

The book is long - over 400 pages - but it never felt like too much. The plot kept me interested till the end, and beyond. I'm looking forward to reading the sequel, Rancid, and I'm sure will read this book again.

I was given a copy of the book in exchange for this unbiased review.