She wanted sleep, but needed to study, and neither involved picking up her phone.
Still, she answered after the third ring, right before the voicemail caught it.
“Is this the Blake residence?”
She nodded. “Yes…who is this?” Mical released a silent yawn as she waited for the response.
She heard only breathing on the other end for a moment.
Prank caller. She yawned again and moved the phone away from her ear to hit ‘End’.
“Miss…” the voice was slow, almost forced.
She held the phone up again. “Yes?”
“I’m with the Ellsworth Police Department. I understand your husband was David Blake?”
She hesitated. “Yes…?”
“I have some bad news.”
Mical listened in silence as the officer explained.
“There was nothing we could do,” he said, his third or fourth cliché since the conversation began. “I’m sorry.”
She swallowed, not wanting to comprehend his words—not wanting to accept them as truth.


As Fairydust Settles has an expected release date of Christmas, 2013.

“You have to write the book that wants to be written. And if the book will be too difficult for grown-ups, then you write it for children.”

Actually, my books are in...but I'm sure I'll be buying some of these wonderful books for myself, too! 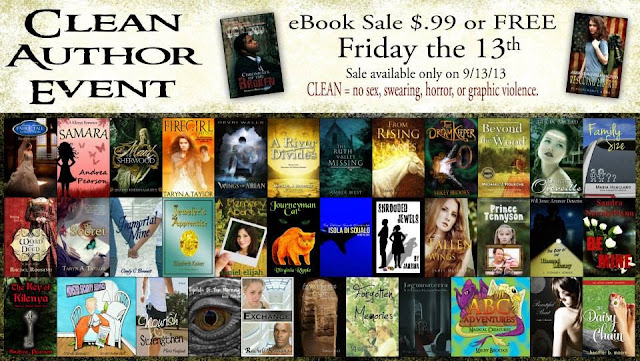 Today only, these books and more will be available on the Kindle for $0.99 or FREE! Visit www.cleanauthors.com to see which authors are participating.

Forgotten Memories and Shrouded Jewels are both available for $0.99 until Monday. If you purchased either book in paperback via Amazon, you can get the Kindle version free! (If you bought the paperback directly from me, please email me by Monday for your free ebook.)

Sammy woke each morning promptly at five, and waited patiently with his tea until Davey trudged out of bed between seven and eight.

He greeted Davey with a grin, and only a touch of a “‘bout time you woke up” attitude. Sammy offered tea, and Davey made coffee; he fed them both sausage-dotted eggs as they silently watched squirrels and birds.

It was a comforting routine, and if it had only included Mical, Davey would have been completely content.

In her absence, it didn’t even matter that she didn’t believe what he did.

Of course, he knew he was fooling himself. It would always matter. But with his parents’ and Sammy’s help, he was learning how to handle it when things returned to ‘normal.’

Sammy turned his attention from a squirrel trying to steal a metal acorn from a lawn ornament, and watched Davey for a moment. “Thinking about your darling again, eh?”

Davey smiled. “All the time.”

He nodded in understanding. “Papa will tell you when the time is right.”

“I’m counting on it,” Davey agreed with a smile.

“I don’t often ask for favors I can’t repay,” he began, his voice steady and deliberate.

Davey nodded. “Anything, Sammy,” he promised.

Actually Finishing Something [in] July: Week Four (sort of)

Thanks to Katie from Whisperings of the Pen!

Although I didn't finish in July...or in August...I liked some of the questions Katie posed, and wanted to answer them anyway!

Do you have a Pinterest inspiration board, or other collection of images, that inspire your story? If so, share one or two of them with us.

I really don't...I do love this gif as a representation of my character Abigail, though: How would the main character of your story react if he or she were introduced to you?

I have two main characters...

Davey: "It's so great to meet a new friend!"

Mical: "Um...you think you know what about me?"

Introduce us to one or two of the secondary characters in your story.

If you've read my first novel (Forgotten Memories), you've met them already. Ella and Joe are part of As Fairydust Settles, and my hope is that their loving arguments will add a bit of humor to an otherwise darker book.

If one of your characters (you choose who) were allowed to choose a super-power, which power would he or she most desire?

Davey would want the power of teleportation, because it would mean he could be with everyone he cares about in moments.

Are you a beginning or independent author? Join us on Facebook! I'm a co-admin of this great group.