Today we have a guest post from Tricia Mingerink, author of an upcoming book, Dare.

Character: He enjoys his powerful position in the Blades. He likes to have power over others, especially the power of life and death. The more helpless his victims are, the more powerful he feels.

Author’s Note: Harrison Vane even gives me the creeps. He is a villain who truly enjoys being a villain. Developing his backstory proved difficult because he isn’t the type of person to have a normal conversation with anyone. Or tell anyone the one thing that makes him feel vulnerable. I hinted at a few things, but most of his backstory isn’t fully revealed. I like the mystery surrounding his backstory. It  leaves a lot up to the imagination of the reader.

First Draft Trivia: Harrison Vane wasn’t the main antagonist. In fact, all of the scenes with him except for the scenes leading up to the climax weren’t in the first draft. I didn’t even have a name for him. When I reached the climax, I realized that Vane had pulled a fast one on me and claimed the spot of antagonist. It took a lot of revisions to add in all the earlier scenes and develop what turned into a duel between Leith and Vane that extended all the way back into their childhoods. Now it’s hard to imagine the book without his creepy sneakiness.

Courage could cost him everything.

Third Blade Leith Torren never questions his orders or his loyalty to King Respen until an arrow wound and a prairie blizzard drive him to the doorstep of the girls whose family he once destroyed.

Their forbidden faith and ties to the Resistance could devastate their family a second time.

Survival depends on obedience, but freedom beckons. How far does he dare go to resist the king and his Blades?

No matter what Leith chooses, one thing is certain. 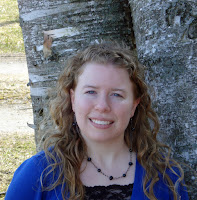 Tricia Mingerink is a twenty-something, book-loving, horse-riding country girl. She lives in Michigan with her family and their pack of pets. When she isn't writing, she can be found pursuing backwoods adventures across the country. 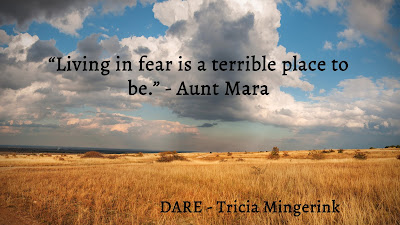 Enter to win a Grand Prize giveaway to celebrate the release of Dare! Prize includes an autographed paperback of Dare, a necklace like the one Renna has in the book with a sterling silver cross pendant, a medieval dagger (not sharp) like the one Leith carries, and Dare-themed bookmarks! (Due to the difficulties in shipping weapons across international borders, this giveaway is open to US residents only). The winner of the giveaway will be announce at the end of the Facebook party on June 10.